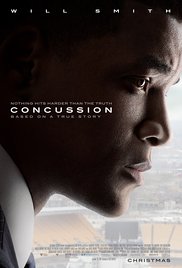 Nutshell: If anyone walks away from Concussion without grieving for those who suffered/are suffering from CTE?  They’re dead inside.  Amazing performances by actors playing affected football players (most especially David Morse as Mike Webster) bring this issue straight into the feel center of the brain.  The rest of the movie is too light a touch, possibly because it tries to cover CTE, Omalu’s love story with his now wife, and the Big Bad that is the business of sport.  Still, this film takes the real-life subject matter and makes it easy to understand, and Smith’s performance is genuine, if not a bit too heroic. Grade: B-

“I’m just asking back what I gave….Help me.”

I have to admit I’ve made my share of “bell-rung jock” jokes in my life.  Y’know, the whole “he’s barely coherent, look at him — one too many tackles” kinda jabs.  Ha ha funny, right?  Sure.  When it’s simply a jest at the expense of musclebound moneybags who are laughing all the way to the bank, with not a care in the world beyond a bone or muscle injury that could sideline them.

But that’s changed for me ever since I saw League of Denial on Netflix.  This Frontline special — and subsequent nonfiction book — shined a hard light on the damage football players can incur by simply playing the sport that they love.  It’s heartbreaking, spine-chilling, and made me angry as hell at the big business machine that chose to cover up these issues rather than bringing them to light.  Yeah, lookin’ at you, NFL.  Concussion is a drama based on this non-fiction research, focusing on pathologist Dr. Bennet Omalu as he finds out about this disease (chronic traumatic encephalopathy, or CTE), researches it, and then gets slammed personally and in the press as a no-account.  No good deed goes unpunished?  Well, not necessarily…but I’m getting ahead of myself.

Obviously, portraying someone like Omalu would be catnip to many actors.  A David with truth and research in his slingshot vs. the mightly Goliath of the NFL and its fanbase.  A Galileo desperately trying to show the truth to eyes that don’t want to see.  No wonder Will Smith snapped this up.  And he goes all-in here.  All the actors do, from David Morse’s amazing portrayal of retired Steelers center Mike Webster (and first researched case of CTE) to Alec Baldwin’s conflicted former Steeler’s doc Dr. Julian Bailes, to Adewale Akinnuoye-Agbaje tragic character arc as former Chicago Bears defensive back Dave Duerson.  [NOTE: Duerson’s family has said that Concussion “smears” Duerson’s name.  So make sure you take plot points outside of the pure medical research with a grain of salt.]

The problem with Concussion isn’t that poetic license has been taken.  It’s always taken when films head from documentary to drama.  It’s that the direction and screenplay are wobbly, never settling down on something for more than a few moments before flying onto the next scene.  That makes it feel like this film has too much to cover and needs to hurry, and that it doesn’t quite have much to go on and needs to cover that up by jumping around and adding in scenes where Omalu destroys drywall in frustration.  If Concussion had focused more on the families of those who suffered from CTE, and how they worked with/against Omalu, it would have been more coherent, and more compelling.  Grimm‘s  Bitsie Tulloch as Keana Strzelczyk (ex-wife of Steelers lineman Justin Strzelczyk, who took his own life and was diagnosed with CTE in 2004) gets one of the most gut-punch lines of the film, but barely any screen time after that.  That’s a hint of the powerhouse this film could have been, rather than the docudrama it is.

Sony has been pinged for trying to cozy up to the NFL and whitewash this story, and perhaps that’s true.  One too many times the story shifts from the powerful one about football players damaged beyond repair, and on to how Omalu and his wife Prema (Gugu Mbatha-Raw, whose talents deserve better) met and fell in love.  And there’s no mention of all the other CTE researchers, or the fallout between Omalu and Then there’s the way the film shies away from portraying NFL bigshots.  Luke Wilson as NFL Commissioner Roger Goodell barely gets screen time, and then the character is only shown giving interviews; real-life footage would have been just as good, if not better. In fact, every real life person who rallied against Omalu barely gets screen time, and is only shown for a few seconds.  But I guess all this over-the-sweater business with real-life CTE deniers is to prevent lawsuit-palooza.  Can’t blame them…but libel ain’t libel if it’s true y’all.  And I would have liked to have seen the film Sony could have made if the studio had more cojones.

Does everyone who plays concussive sports come down with CTE?  There’s some debate. In a Time article released this week, Omalu says “[over] 90% of players who play to the professional level have some degree of this disease.” But just before the end credits of Concussion,  it’s estimated that 28% of all players will suffer. That’s a helluva gap. And while CTE is gaining acceptance even within the NFL, there are worries about how young, non-professional players may fare in later years.  Concussion‘s final scene hints that this could be just the beginning of the debate on CTE.  (In fact, the NFL may have pulled funding from the NIH study mentioned at the end of Concussion.) Start with Concussion if you’d like to whet your appetite, then dig in to League of Denial to get the real story.