The movie came a’tcha at the speed of sound.  So isn’t it just and right that you get your hands on the soundtrack?  Y’know, the soundtrack by Muse and Marco “I wrote the soundtrack for Scream” Beltrami that Huffington Post says is “Perfect”?  Yes, you need it.  Here at Geek for e, we’d like to help you with that. 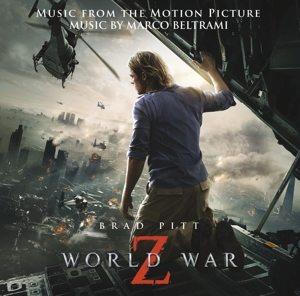 We’ve got 4 copies of the original soundtrack to World War Z, and we’re giving ’em away!  Yes, yes we are.  How to you win yourself a copy?  It’s easy.

What’s your favorite horror movie music?  The Exorcist‘s “Tubular Bells”?  Or maybe when John Carpenter tweaked that score for Halloween?  Jaws‘ scary-cool DA-DUM?  Or the 80s throwdown of The Lost Boys?

How to enter?  Oh, you know the drill.  Send me an email with the subject line “Surviving The Zombie Apocalypse With Muse“.  Include your name, snail-mail address (how else am I gonna get it to you?) and a bit about your favorite horror movie music.  That’s it.  Do it by Monday, July 1st at 5:00pm and you could be a winner!

No guarantees that Muse’s music will soothe the savage zombie, however.  For defeating the hordes of undead you’re on your own.

But if you’re holding a copy of the World War Z soundtrack?  Just know I’ll be jealous of you as I sprint away from the infected.

(NOTE: This giveaway is for US folks only.  Because I’m too cheap to send out to winners overseas.  There, I said it.)