TwitReview – “Dawn of the Planet of the Apes” proves that monkeys make everything better. The war begins between Apes and Humans. Great Ape battles and very dull humans (characters and acting). Grade: B 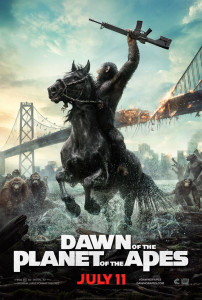 “Apes do not want war” -Caesar

It has been ten years since the events shown in Rise of the Planet of the Apes with the Simian Flu wiping out a large portion of the humans.  For the humans who lived, they gathered and eventually lived in villages set up inside the quarantine zones that had been enabled ten years prior. The have taken what food and water and weapons they can find and stock-pilled them for safety and protection from the Apes and each other. During these ten years, the first four were spent watching the world die from the virus while the next four was about the humans fighting each other. During this time they eventually learned to live together and try to keep the old world ways in this brave new world they lived in.

After the attack at the Golden Gate Bridge, the Apes gathered and moved to the forests of San Francisco (as seen in the first movie where Caesar tells Will Rodman [James Franco] that he is now home). During these ten years they have built their own organizational hierarchy that they live by – Ape does not kill Ape – and are teaching the young the ways of Caesar. There is a hierarchy in who the leader is (Caesar) and who the follows are that support him (Maurice, Rocket) and who the followers are that want to be the leader (Koba). The Apes speak a little big of English but generally speak in sign-language taught to them by Caesar.

There has been no contact with the humans for the past two years until a small group from neighboring San Francisco shows up looking to free a blocked damn that if restored to functionality, it would bring power back to the city. However the first encounter with the Apes by the humans results in Ash being shot. The Apes chase the humans back to San Francisco where Caesar declares that they will leave the humans alone if the humans will leave the Apes alone. Koba believes that the humans can’t be trusted while Caesar befriends the small group of humans that he allows access to fix the damn. During this time Koba finds that a mass storehouse of weapons are on the outskirts of the zone the humans are living in and he knows that Caesar won’t believe him unless there is proof.

Let us know what you thought after you see the movie. Sound off in our comments section here or visit us on our Facebook page.