TwitReview: Jeremy Renner stars in Kill the Messenger. The real-life story about journalist Gary Webb who’s articles in 1996 revealed the hidden truth about the CIA controlled drug trafficking taking place in the United States.  Grade: B- 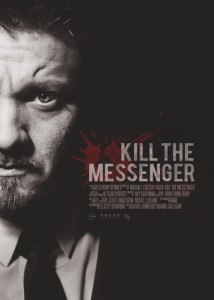 Kill the Messenger is a thriller taking place between 1996 to 1997 and chronicles two years of the life of  of journalist Gary Webb and how his life changed after writing the series “Dark Alliances” for the San Jose Mercury News.  Jeremy Renner plays Webb who’s article Dark Alliances revealed a link between the CIA and the drug wars of the 80’s. This article was revered by many, including the paper he worked for, until the CIA, the Washington Post, and the LA Times all managed to poke holes into the story. This caused the SJMN to publish a letter days later stating that the story may have had some holes and embellishment. CIA espionage, drug war, Iran-Contra war, 1st Amendment, and the story of a man who dared to tell the truth.

Kill the Messenger is the story of a man daring to tell the truth and getting killed for it. Script writer Peter Landesman manages to convey the themes from  Webb’s Dark Alliance (the novel based off of his findings and and original articles) and Nick Schou’s Kill the Messenger (the story about Webb’s life).

Kill the Messenger is Rated R with a run time of 112 minutes.