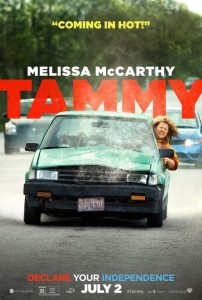 Tammy is a movie that just can’t figure out what type of movie it wants to be as the drama is sad and depressing and the comedy is just out of place with the drama. To look at Tammy on paper it appears that this should be a knock-it-out-of-the park home-run comedy. With the likes of  Melissa McCarthy starting as the titular Tammy, Susan Sarandon as Grandma Pearl, Allison Janney and Dan Aykrod as Tammy’s mom and dad, Nat Faxon as Tammy’s cheating husband and Toni Collette as the cheating-with neighbor,  Gary Cole as the man that Pearl hooks up with, and lastly McCarthy’s real-life husband Ben Falcone not only has a brief part in the movie but also co-wrote the movie with McCarthy and Directed the thing. So how could all this talent make a movie that was so mind-numbing, depressing, and just awkward?

McCarthy stars as Tammy, a woman with a lot of nothing to live up to. She works for a Topper Jack’s fast food restaurant, she is in a dead-end marriage, and doesn’t have a strong relationship with her family. After being fired from work she comes home to find that her husband (Nat Faxon) is having a romantic dinner with their neighbor (Toni Collette). Tammy realizes that they have been seeing each other behind her back, so Tammy packs up some cloths and walks to her parent’s house located three houses down the street.  We learn that Tammy has been down this road before and generally runs away, leaves town for about 10 miles, and then comes back to live the dull life she is living. With the help of Grandma Pearl (Susan Sarandon) and her 4-door Chrysler, they set off on a road trip cross country from their small town in Illinois to Buffalo, New York.

The road trip is all about finding one’s self and and just continues displaying how depressing Tammy (the character and the movie) really is. In between Pearl drinking all the time, strange hook-ups, and landing both of them in jail, Tammy just has no direction (again the character and the movie).  When we meet Perl’s cousin Lenore (Kathy Bates) and her partner Susanne (Sandra Oh), they teach Tammy that you have to go for what you want and not wait for it to be handed to you. Tammy realizes that she needs to break out of her funk and after a 38-day stint in prison, she learns to move forward and finishes the road trip that she started with her Grandma. This is after she learns from her father Dan Aykrod (who is really starting to look a lot like Richard Nixon) that Pearl did try to come-on to him years ago, but she was drunk and was hitting on just about everyone after the passing of her husband.

As for the “comedy” that is in Tammy, there are some good one-liners and even some good sequences but these just don’t really help move anything forward and most of the sequences feel forced. The scenes that get the most laughs are the scenes that have been shown ad nauseam in the trailers/commercials – the ones with Tammy at the Topper Jack’s being fired and then later when she robs the one in Louisville, Kentucky. And THESE are the scenes that feel forced and really feel like they don’t fit in with the overall mood of the movie.

Tammy is rated R for language, drinking, and adult situations with a run time of 96-minutes (that honestly felt a lot longer).  If this were Jim Kramer doing the review, he would be breaking a coffee mug into a lot of pieces with a baseball bat and screaming “Stay clear of this one!”. Luckily he’s not here but if he were, those would be words to consider.