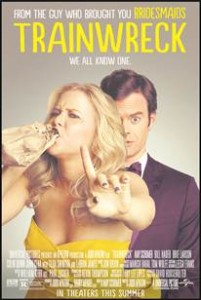 Dr. Aaron Conners (Bill Hader) seems like the perfect guy; smart, funny, a career he truly enjoys, and open to commitment.  Amy tries to do the pump-n-dump, but finds herself attracted to him just as her father Gordon’s MS progresses to the point where dad has to be in assisted living.  The fact that Amy and Aaron both want to be with the other is typically the end of a rom-com, but here it’s just the beginning.  Trainwreck looks at a relationship past its first kiss, and into the first fight, the settling in, interacting with the family, and all of the other little things that make long-term relationships work…or not.  Amy is all too willing to drop everything when things get rough, because that’s what she saw happen in with her parents. But Aaron isn’t willing to break up when things get bumpy.  Can Amy handle that?  Roll film!

Based (very) loosely on Schumer’s life — along with how her parents’ divorce and her father’s MS have affected her — Trainwreck is more a family romance than a die-hard romcom.  Amy’s sister Kim (Brie Larson, United States of Tara) has a husband and step-son that she loves unconditionally.  Kim’s ability to find love and happiness, and Amy’s fear of intimacy and love of the party life, are just as important to the story.  As is the relationship Amy has with her father (played with gruff matter-of-factness by Colin Quinn) and the antipathy Amy feels towards Kim’s husband Tom (Mike Birbiglia, Orange is the New Black) and almost too goody-goody son Allister.

As with Inside Amy Schumer, Schumer takes a hard look at relationships, stereotypes, and human interactions here.  There are many hilariously inappropriate bits in Trainwreck, but with Judd Apatow’s direction Schumer’s screenplay becomes more of a love letter to family and people who matter.  A twisted, kinda wrong letter — “I’d fuck the shit outta Willy Wonka” is but one bon mot you’ll hear — but one worth spending time with.

If you’ve taken a look at the cast list and thought it’s a who’s-who of funny folks, you don’t know the half of it.  Dave Attell, Jon Glaser, Tim Meadows, Vanessa Bayer and Nikki Glaser all have roles here.  But what really struck me is how Apatow and Schumer coaxed hilarious performances from the likes of straight-men and non-actors like John Cena, LeBron James, Method Man, Chris Evert and Marv Albert.  The cherry on top is the film-within-a-film, The Dog Walker, an arthouse smash that everyone in the film watches.  It “stars” Daniel Radcliffe and Marisa Tomei, and it’s a not-so-subtle knock on navel-gazing black-and-white auteur films.  It’s also deadpan hilarious, and pops up on multiple occasions. I’m already hoping for a special bonus extended peek via BluRay.

If you don’t already know, Schumer has no problem making fun of herself, and of the clichés that surround men, women and romance.  Those clichés could come off as one bit of pointless slapstick after another in the wrong hands.  But in Trainwreck, she and her character come off as honest and true.  And funny as hell.

Oh, and she’s a heckuva dancer, even though she tries to muk it up for laughs.  A touch of “Tambourine”at the film’s climax not only serves as it’s wrap-up bit, it paints Amy the character and person as a loveable, relatable goofball.  As if there was any doubt.