When a mysterious and powerful vortex suddenly appears in various LEGO worlds, different characters from DC Comics, The Lord of the Rings and The LEGO Movie are swept away. To save their friends, LEGO Batman, LEGO Gandalf and LEGO Wyldstyle journey to locations beyond their wildest imaginations, and they soon realize that Lord Vortech is summoning villains from across different LEGO worlds to help him gain control. As his power grows, worlds mix, unexpected characters meet and all boundaries are broken. Our heroes must travel through space and time to rescue their friends before the vortexes destroy all of LEGO humanity.

END_OF_DOCUMENT_TOKEN_TO_BE_REPLACED

Leguizamo comic relief narration is super fun.  PBS and NatGeo dinosaur education rolled into film.  In your face 3D will delight the kids.  B+ 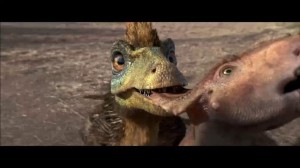 Pachy gets his battle scar

Yes.  I know what you’re thinking.  “Why, Denise?  Why?”  I’m guessing that Universal Pictures wanted to add a little dino action to the ever-growing list of films that are being re-done in 3D.  After the likes of 3D/IMAX showstoppers like Avatar, Final Destination 5 and Life of Pi, it’s true that Jurassic Park doesn’t have the visual chops that current CGI-laden cinematography have to offer.  But damn if Jurassic Park doesn’t give us something else; heart.  Try as they might, the 21st Century films can’t quite put their fingers on the pulse of a movie.  It’s lovely to remember a time when action films had characters you truly cared for, and a plot beyond showing you Kewl Stuff.

Harken back to 1993.  Western Europe begins the EC, Bill Clinton starts his second term, a gallon of gas was just over a dollar (and we were all still bitching about it), and two guys — Stephen Spielberg and Michael Crichton — brought us dinosaurs on the big screen.  The story about a man who wanted everyone to see real, live dinosaurs (and who had more dollars than sense) was a sensation, with special effects so spectacular they still stand up today.  And when those dinos break free of their enclosures?  Everyone felt a chill.

But how many trips to Isla Nublar does one need to take?  For me it’s innumerable, as I have the Blu-Ray box set of all three JP films.   It’s definitely worth it to see Jurassic Park up on the big screen again.  And, it’s been 20 years; there’s a whole new generation that haven’t had the pleasure of seeing humongous dinos in the dark of a multiplex.  Fancy that.  Jurassic Park may be every bit the dinosaur that it’s characters encounter, but it’s still every bit as fascinating.  All in all it’s glorious to see this movie back on the big screen, and it’s a treat for those able to head out and give it a look.