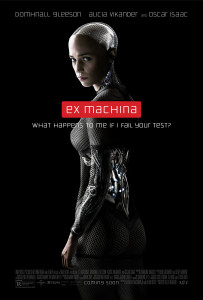 Smart, intriguing, and not afraid to stare straight into the tough questions about AI.  Genres wobble a bit at the climax, but it’s a well-executed film.  Grade: B+

Blade Runner.  A.I.  Terminator.  Transcendence.  I, Robot.  2001: A Space Odyssey.  Ghost in the Shell.  There are scads of films out there about robots, artificial intelligence, and how man-made machines could one day become as “real” as we are.  A metal-and-microchip Pinocchio, if you will.  Ex Machina is the latest film that asks whether we should test those boundaries, and it’s a fascinating thinkpiece of a film.

Code monkey Caleb (Domhnall Gleeson, Bill Weasley from the Harry Potter series) wins his company’s lottery; he gets to spend a week with the company’s owner/CEO, Nathan (Oscar Isaac, A Most Violent Year).  Once Caleb arrives — after a very long plane ride into the depths of BFE Nowheresville — he’s asked to run the Turing Test on Nathan’s latest creation, Ava (Alicia Vikander, looking like a younger Natalie Portman).  BTW yes, this test is named after the man on which The Imitation Game is based.  Ava is a beautiful piece of machinery, with lifelike hands, feet and face. But the rest of her leaves no doubt that she’s 100% machine.  As Caleb begins to question the incredibly human-like machine, he becomes fascinated, and Ava becomes attached.  But what’s really going on; is she truly feeling something?  Is he?  And what does that mean?

As the film spools out, we learn a whole lot about Caleb’s motivation, and Nathan’s.  And there’s a whole lot of Deep Thoughts fluttering around as well, from a human/machine’s ability to love, fear or lie…and what how we interact with others says about us as people, and as humans.  These ideas come at you constantly, and though they are definitely topics worthy of consideration, there’s really no time to sit back and contemplate these as the story unfolds.  Guess that’s better than long stretches of boredom that would afford such navel-gazing.  Still, as these ideas slam into your personal cerebral cortex, it’s tough to absorb when scene after scene demands more of your brain-cell time.

Ex Machina does depend on a bit of the ol’ computer cliche characterization; Caleb is a guy that works and sleeps, with little social interaction.  Nathan the computer savant would rather be researching than interacting with “real” people.  AI Ava is curious about the outside world, and seems to long for the company of others; a 180 from her creator Nathan, who prefers a housekeeper that can’t speak English.

Writer/director Alex Garland (Never Let Me Go, 28 Days Later) manages to keep interest high while doling out bits and pieces of each characters motivations.  Richarc Conway and the folks at Millennium FX create CGI that blends so well into its surroundings that it’s easy to believe the story.  And cinematographer Rob Hardy is able to create gorgeous wilderness vistas as well as cramped red-lit underground bunkers/research facilities.  And the actors deliver performances that are lifelike (Ava), compelling (Caleb) and subtly broken (Nathan).

Still, with all the good I had to knock my overall love down a notch for one reason; the climax.  Ex Machina goes from a thinkpiece of a film to a flat-out thriller towards journey’s end.  That helps things if you go see this with a group of friends and want to discuss what could possibly happen.  It’s not Birdman in it’s “WTF just happened” vibe, but with the shakeup in pacing and story?  I had more than one Scooby Doo head-shake moment as I tried to figure out when the film tipped into thriller category.  (Gotta admit that Garland’s work on 28 Days Later does come in handy when he tries to deliver suspense.  He’s definitely no one trick pony.)

If you dig AI films, catch Ex Machina, and then head home and re-watch Blade Runner for a double-feature about those that long for true existence.  Ex Machina will definitely play with your feels, and make you really think about life and artificial life.