Bad Words is a movie that really made my head spin by the end. Not because it was that bad or that the plot wast that crazy and unbelievable. My head was spinning because I really wasn’t sure how to classify this movie. Did I like it? Was it bad? Was it worth the effort to cheer for Jason Bateman’s character Guy Trilby? Who really was the “bad guy” here and was there really one to be had??? And on top of that when I was I asked “What did I think of the movie” as I’m asked after every screening….all I could come up with that Bad Words is a move with a bit of sweetness, a bit of rude and crude, and some sadness that at the end of the day reminded me of a desert. Don’t ask me how I came to this as I’m still not sure how I came to this conclusion. All I know is that Bad Words left me feeling like I had a mixture of flavors that all came together like a sweet desert and when it was over I was left wanting more. 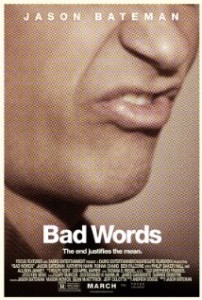 Jason Bateman stars in and Directs  Bad Words, a movie that has plenty of crude laughs but also a story of sadness and loneliness about a man who lost more then his youth as a child. Bateman plays Guy Trilby, a product warranty reviewer, who has managed to get into the Quilting Bee Spelling Bee competition by using a loophole to allow him to enter. He has the help of report Jenny Widgeon (Kathryn Hahn) from the internet site The Scroll and Click who has not only sponsored Trilby to help with getting him into the competition, but is also researching and writing the story about why a 40-year old man is trying to compete in this competition that is geared toward children. Jenny eventually learns why he is doing what he is doing in regards to the Spelling Bee. This leads to a very sad confrontation between the two because Trilby won’t allow anyone to get close to him emotionally yet has shown that he really loves her as a friend and a relationship.

Along the way to the Spelling Bee Finals, Trilby ends up befriending a little 10-year old named Chaitanya Chopra (Rohan Chand) who is attending the Bee in an unconventional way. His parents are traveling in first class while he is in coach with Trilby. His father believes that this helps grow responsibility allowing Chaitanya to be on his own and not have parent supervision at all times. This is also true when he is on the same hotel floor as Trilby while his parents are in a different hotel. These two different people in age and background become quick friends and in one night Trilby helps Chaitanya learn to grow and have fun as they have a night of adventure running around town making mischief with pranks, paying a street walker $10 to see her breasts, and getting to know each other as friends would.

At the spelling bee, the Chairmand of the competition, Dr. Bowman (Philip Baker Hall) and the President of the competition Dr. Bernice Deagan (Allison Janney) both want Trilby out of the competition and Deagan will do whatever she can to get him out. In a turn of events she manages to fix the memory stick with the Spelling Bee words and makes all that come to Trilby the longest words imaginable which he is able to spell each and every time. Needless to say the ending battle between Trilby and Chaitanya brings friends closer and shows that power of friendship can solve everything. This too also finally reveals the true reason why Guy is doing what he is doing and the relationship that is involved.

Rated R with a short run time of 88 minutes, Bad Words has lots of rude and crude attitude that will leave you laughing in between the sadness and sweetness. It is not a perfect movie but it gives enough to make it a worthwhile trip.