TwitReview: Baywatch delivers the laughs while having a serious plot and not taking itself too serious. Dwayne Johnson and Zac Efron work well as a comedy duo. Grade: 3.5 stars out of 5 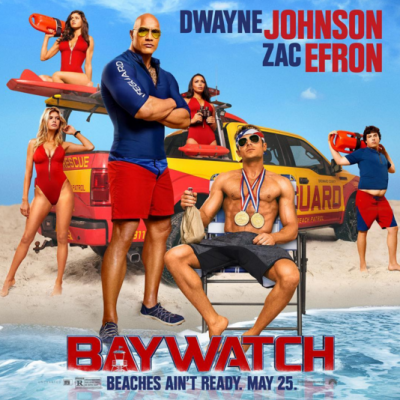 They are the elite of the elite. They are Baywatch, protecting the bay and those who visit. Solving crimes while saving lives.

Baywatch comes to the big screen and continues the new trend in Hollywood taking an existing franchise and making it “modern” while keeping the feel and love for the original source material intact. The humor is fast and fun while the plot is so simple it literally could have come from an episode of the original show (it’s NBC run or the Syndicated run).

Drugs are washing up on the bay and the police can’t seem to locate who the new player in town is. Baywatch on the other hand, tackles cases like this on the beach on a daily basis. Why call the cops when you can call a lifeguard?!

How’s the humor? Did the trailers/commercials show all the best parts?

The jokes are more situational in humor but there are blatant jokes that will make you laugh. The long-running joke is Mitch Buchannon calling Matt Brody by any other name outside of his own. Lots of boy band references in this process. Jon Bass really steals the show with his “lost puppy” act toward Kelly Rohrbach’s CJ Parker. She notices him and lets on that she knows who he is and he can’t seem to find the words to speak anything to her. Check out his dance moves when they are on-screen!

Do I need to have seen any of the episodes of the TV series to understand what is happening?:

You’re good if you’ve never seen any episodes of the TV series. This is a reboot so you’re meeting the characters for the first time and following along for the ride. BUT if you’d like to see any of the TV series for reference, I’m sure there are clips on YouTube.

There are two notable cameo appearances in Baywatch – (highlight to see who shows up) David Hasselhof reprises his role of TV’s Mitch Buchannon as he is the mentor of Dwayne Johnson’s Mitch Buchannon and Pamela Anderson reprises her role of CJ Parker who has been teaching the Baywatch Hawaii staff for the past 20 years.