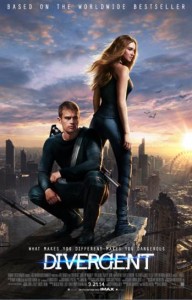 Great YA (that’s Young Adult, for you muggles) fiction is all over the bookstores of late.  And Hollywood has taken notice.  Divergent, the first book in the series of the same name by Veronica Roth, is coming soon to a theater near you.  And we have passes for the Baltimore screeing!

DIVERGENT IS A THRILLING ACTION-ADVENTURE FILM SET IN A WORLD WHERE PEOPLE ARE DIVIDED INTO DISTINCT FACTIONS BASED ON HUMAN VIRTUES. TRIS PRIOR (SHAILENE WOODLEY) IS WARNED SHE IS DIVERGENT AND WILL NEVER FIT INTO ANY ONE GROUP. WHEN SHE DISCOVERS A CONSPIRACY BY A FACTION LEADER (KATE WINSLET) TO DESTROY ALL DIVERGENTS, TRIS MUST LEARN TO TRUST IN THE MYSTERIOUS FOUR (THEO JAMES) AND TOGETHER THEY MUST FIND OUT WHAT MAKES BEING DIVERGENT SO DANGEROUS BEFORE IT’S TOO LATE. BASED ON THE BEST-SELLING BOOK SERIES BY VERONICA ROTH.

DIVERGENT WILL BE RELEASED IN THEATERS AND IMAX ON FRIDAY, MARCH 21, 2014

And now, how to get a pair of passes for yourself?  Read on….

END_OF_DOCUMENT_TOKEN_TO_BE_REPLACED This movie is either gonna be awesome or so awesomely campy that you’re gonna wanna see it anyway.  (I’m hoping that De Niro will be brilliant, and that this isn’t just the beginning of an Al Pacino-esque flameout….)

Anyway, Grudge Match!  Old dudes getting their fight on, and a funny, two-finger salute to everyone who has ever made fun of Sly for continuing to crank out the testosterone films.  Here’s the synopsis:

Award-winning movie legends Oscar® winner Robert De Niro (“Raging Bull,” “Silver Linings Playbook”) and Oscar® nominee Sylvester Stallone (the “Rocky” films, “The Expendables”) star as old boxing rivals who come out of retirement for one final match. De Niro and Stallone play Billy “The Kid” McDonnen and Henry “Razor” Sharp, two local Pittsburgh fighters whose fierce rivalry put them in the national spotlight.  Each had scored a victory against the other during their heyday, but in 1983, on the eve of their decisive third match, Razor suddenly announced his retirement, refusing to explain why but effectively delivering a knock-out punch to both their careers.  Thirty years later, boxing promoter Dante Slate Jr., seeing big dollar signs, makes them an offer they can’t refuse: to re-enter the ring and settle the score once and for all.  But they may not have to wait that long: on their first encounter in decades, their long-festering feud erupts into an unintentionally hilarious melee that instantly goes viral.  The sudden social media frenzy transforms their local grudge match into a must-see HBO event.  Now, if they can just survive the training, they may actually live to fight again.

The film has been rated PG-13 for sports action violence, sexual content and language.

So, want passes?  Here’s the deets:

END_OF_DOCUMENT_TOKEN_TO_BE_REPLACED

For the first time in movie history, audiences will truly see and feel what it was like when dinosaurs ruled the Earth.  Recent discoveries and a breakthrough in technology will introduce new and unique dinosaurs that are more real than ever before and put moviegoers in the middle of a thrilling prehistoric adventure, where an underdog dinosaur triumphs against all odds to become a hero for the ages.

C’mon, like that doesn’t scream adorable.  Like Land Before Time, but more kewl, and less cutesie for cutesie’s sake.

Here’s the deets for the screening…. END_OF_DOCUMENT_TOKEN_TO_BE_REPLACED

Hi everyone!  The studio has switched the date of the Baltimore screening of The Book Thief: it was scheduled for 11/14, but now it’s Monday, 11/19.

I wish there was a way to guarantee that folks that already have passes would automatically get passes for the 19th.  But unfortunately, that’s not so.

Good luck everyone, and sorry for the mix-up! Movies are comin’ at’cha fast & furious!  Wanna catch the latest, The Book Thief?  “But Denise, I don’t know what it’s about!”  No problem.  I got you, darlin’.

Take it away, Sexy Librarians of PR!

Based on the beloved bestselling book, THE BOOK THIEF tells the inspirational story of a spirited and courageous young girl who transforms the lives of everyone around her when she is sent to live with a foster family in World War II Germany.

Screenplay by: Michael Petroni, based upon the novel by Markus Zusak

Ahh.  So NOW you wanna go?  Okay.  So read on for how to get your hands on a pair of passes!

END_OF_DOCUMENT_TOKEN_TO_BE_REPLACED

Well, that’s a no-brainer, right?  Because Marvel has been cranking out some serious awesome lately.  (Seen Agents of S.H.E.I.L.D lately?  OMG — how’d they bring Coulson back?  Wait, don’t tell me….)

So, we’ve got screening passes for the lastest Marvel throwdown — Thor: The Dark World.  Want a pair for yourself and your favorite person?  Read on!

Okay, as with most Marvel film screenings, this one’s happening with hard-copies.  So?  We’ll put your name on a list, and the gracious, awesome PR folks will give you your pass at the door!  Yaaaaay!

How?  E-mail me at geekfore@gmail with the subject line NORSE GODS ARE HOT.  The first twenty folks will get two passes to the November 4th screenin!.  Yipee!  And yes, I’ve had way too many Good N Plenty’s today.  Damn you, fun-size candies.

James Gandolfini was an amazing performer.  Julia Louis Dreyfus could pretty much read the phone book and I’d be crying with laughter.  So it’s pretty much a sure thing that Enough Said, a film that brings the two together — and is one of Gandolfini’s last films — is a movie to catch.  What’s it about?  Glad you asked.  Take it away, stupendous supermodels of PR!

A divorced and single parent, Eva (Julia Louis Dreyfus) spends her days enjoying work as a masseuse but dreading her daughter’s impending departure for college. She meets Albert (James Gandolfini) – a sweet, funny and like-minded man also facing an empty nest.  As their romance quickly blossoms, Eva befriends Marianne (Catherine Keener), her new massage client. Marianne is a beautiful poet who seems “almost perfect” except for one prominent quality: she rags on her ex-husband way too much. Suddenly, Eva finds herself doubting her own relationship with Albert as she learns the truth about Marianne’s Ex.  ENOUGH SAID is a sharp, insightful comedy that humorously explores the mess that often comes with getting involved again.

Remember — seating is first-come, first served and isn’t guaranteed.  So if you want a seat, get there early.

Good luck everyone, and for the winners, congrats!

Good morning party people!  Did your weekend go by without you getting your dance on?  Well, I can help you get your fix vicariously.  Because screening passes!  Battle of the Year is the latest cool-beans dance pic, and it’s starring Josh Holloway (LOST), Laz Alonso, Josh Peck, Caity Lotz and Chris Brown.  This film is hitting theaters September 20th, but wanna see it earlier?  Of course you do.  Need more info?  Of course I’ve got it.  Take it away, breakdancing PR peeps!

Battle of the Year is the Olympics of break dancing, a tournament held every year that attracts all the best teams from around the world, but the Americans haven’t won in fifteen years. Los Angeles Hip Hop mogul and former B-Boy Dante (Alonso) wants to put the country that started the Sport back on top. He enlists his hard-luck friend Blake (Holloway), who was a championship basketball coach, to coach his team. Armed with the theory that the right coach can make any team champions, they assemble a Dream Team of all the best b-boys across the country. With only three months until Battle of the Year, Blake has to use every tactic he knows to get twelve talented individuals to come together as a team if they’re going to bring the Trophy back to America where it started. Inspired by the actual world championship held yearly in France.

We’ve got 50 ADMIT TWO passes to the Baltimore area screening.  Get yourself to GOFOBO and grab yourself a pass!  Clicky:  http://l.gofobo.us/Dw4kXfF6

REMEMBER: seating is first-come first served and isn’t guaranteed.  So make sure you get there early to grab yourself a seat!

Summer seems to be winding down, but before you decide to switch your movie diet to all-indie (not that there’s anything wrong with that), how about a slam-bang action film?  Groovy, ’cause we’ve got passes to Getaway, and I wanna give ’em to you!

What’s Getaway?  Well, I could blather, or I could let the wise and wonderful PR folks do a better job.  Yeah.  Here’s there’ release:

Former race car driver Brent Magna (Hawke) is pitted against the clock.  Desperately trying to save the life of his kidnapped wife, Brent commandeers a custom Ford Shelby GT500 Super Snake, taking it and its unwitting owner (Gomez) on a high-speed race against time, at the command of the mysterious villain holding his wife hostage.

Rounding out the cast are Rebecca Budig and Bruce Payne.

This film has been rated PG-13 for intense action, violence and mayhem

throughout, some rude gestures, and language.

END_OF_DOCUMENT_TOKEN_TO_BE_REPLACED

Sorry I’ve been slack lately.  Things have been crazy.  I almost feel like heading out and starting over.  Maybe whipping up a new identity?  In We’re The Millers?  They’re doing just that.  Our PR people have the skinny:

David Burke (Sudeikis) is a small-time pot dealer whose clientele includes chefs and soccer moms, but no kids—after all, he has his scruples.  So what could go wrong?  Plenty.  Preferring to keep a low profile for obvious reasons, he learns the hard way that no good deed goes unpunished when he tries to help out some local teens and winds up getting jumped by a trio of gutter punks.  Stealing his stash and his cash, they leave him in major debt to his supplier, Brad (Ed Helms).

In order to wipe the slate clean—and maintain a clean bill of health—David must now become a big-time drug smuggler by bringing Brad’s latest shipment in from Mexico.  Twisting the arms of his neighbors, cynical stripper Rose (Aniston) and wannabe customer Kenny (Will Poulter), and the tatted-and-pierced streetwise teen Casey (Emma Roberts), he devises a foolproof plan.  One fake wife, two pretend kids and a huge, shiny RV later, the “Millers” are headed south of the border for a Fourth of July weekend that is sure to end with a bang.

Seen the trailer?  Pretty nice, right?  Anybody that uses Mickey Avalon in a trailer is cool in my book.  So how to score yourself a pass?  You know what to do….