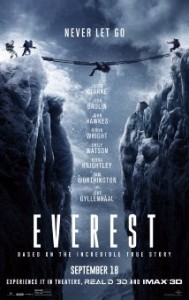 Everest manages to tell a true story without stooping to creative license add-ons.  The characters may lack depth, but the mountain’s majesty — and the story’s horrifying heartbreak — more than make up for it. Grade: B+

First things first; Everest is not the feel-good movie of the 2015 awards season.  The film — based on the nonfiction book Into Thin Air: A Personal Account of the Mt. Everest Disaster by Jon Krakauer — is relentless, frightening and unnerving.  Director Baltasar Kormákur gives no quarter, and there’s no rest from the horrors unfolding once the trek up Mount Everest goes wrong.

Another plus; the screenplay doesn’t stray far from the true story.  William Nicholson’s work on Gladiator, Les Misérables and Unbroken and Simon Beaufort’s on 127 Hours and Slumdog Millionaire are evident here.  Though the plot jumps from one group to another, it’s easy to follow and the tension doesn’t let up for a second.

And then there’s the cinematography.  This is where you want to spring for the full IMAX 3D thing.  Filmed in Nepal, Iceland and the Italian Alps, it’s absolutely breathtaking.  There’s beauty, and a savage grace to the film, and while I could never get up the courage to scale Everest, I can see why so many attempt it.  (Though I’d love to make it to Base Camp.  Even before any real climbing or need for O2, it still looks like an amazing experience.)  Might as well just put Salvatore Totino’s name in the Oscar pool, because a nomination for Best Cinematography is in the bag here.  Everest seems like a “set up cameras and shoot” film, but I know there must have been a ton of production design that went into making everything look so natural.  I’d love to dig deeper into that.  The realism and attention to detail is staggering. Even little things like the prayer flags strewn everywhere, the oxygen tanks and other things left on the mountain, and the way the snow and ice freeze on people depending on the way the wind blows…it’s all done remarkably well.  And shout out to the product placements; hey, North Face, Helly Hanson, Columbia et al. are stuff climbers/hikers actually use.  In this case, I’m pleased they trotted out labels.

Onward, to the story itself.  As this film deals with the disaster on Mt. Everest in 1996 — when several groups of climbers tried to climb at the same time, causing time delays that lead to many being stranded on or near the peak when a massive storm hit, leading to the deaths of 8 people — all these characters can also feel like a clusterbleep.  But focusing on a handful of the characters helps lend a cohesiveness to the overall story.  So do hardcore performances by Jason Clarke, John Hawkes, Michael Kelly, Sam Worthington, Josh Brolin, and Jake Gyllenhaal, as some of the climbers.  Kudos also go to the amazing Emily Watson and Keira Knightley as “base camp mom” Helen Wilton, and Jan Arnold, the wife of one of the climbers.  Putting in my bet that this ensemble will get a tap for SAG’s Outstanding Performance by a Cast in a Motion Picture.  Hint: the final scenes on the mountain, where one character knows he won’t make it and has one last satellite call to his wife?  If you’re not tearing up, you’re dead inside.

From the first frame of Everest, you see how incredibly insane it is to attempt to scale this mountain; the majesty of  Mt. Everest can’t be denied.  Neither can the casual indifference of many of the amateur climbers that make the attempt.  With Everest, it’s all here, and yet the film asks you to make up your own mind.  Me?  I’m still thinking.  Maybe that’s the real end game for this film.