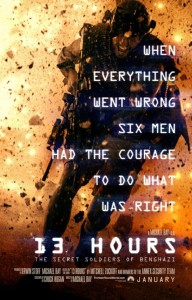 “You can’t put a price on being able to live with yourself.”

If anyone has ever fist-pumped about a Michael Bay film, it’s this gal right here.  Let’s face it; Michael Bay Go Boom.  And it’s glorious.  Except when it’s heartbreaking too.  In 13 Hours: The Secret Soldiers of Benghazi (that I’m shortening to 13 Hours for this review because c’mon now) Bay and his cast dig deep, giving moviegoers not only the pomp and circumstance of war, but the pain, fear and uncertainty that goes along with all the ooh-rah.

For me, I’d only really heard about Benghazi in the news, usually when the city’s name was tossed like a grenade into some sort of political debate.  So for everyone else who needs a bit of a refresher?  On September 11th, 2012, a United States diplomatic compound in Benghazi, Libya, was attacked by Islamic militants, killing a United States Ambassador and a member of his staff.  Hours later, the militants attacked a CIA compound approximately a mile away from the first attack, killing two United States government contractors serving as the CIA’s Global Response Staff  (GRS).  13 Hours follows the story of the six GRS members — former US military — on the weeks before, and all through, the attacks. END_OF_DOCUMENT_TOKEN_TO_BE_REPLACED

Based on the 2013 book 13 Hours by Mitchell Zuckof, Director Michael Bay brings us the true story of the six members of a security team who fought to defend the American diplomatic compound in Benghazi, after the attack of Radical Islamist terrorists on September 11, 2012, the 11th anniversary of September 11, 2001 attacks.

END_OF_DOCUMENT_TOKEN_TO_BE_REPLACED

I’m a fan of the Fast and the Furious franchise. You know what you’re getting when walking into one of these movies – fast cars, lots of action, and a plot that is simple with a twist at the end. To me, that’s not a bad thing. It means that I can check my brain at the door, sit back, and watch a movie without having to think too hard on what’s happening in front of me.

Fast 6 (or Furious 6 as the title on the print we saw had it listed) delivers on everything I listed above. There are fast cars and an incredible chase around the streets of London. There is lots of action and stunts that will blow your mind (and a few that may make you suspend reality for a few seconds, but again what were you expecting for this type of movie?). And there is a plot that actually takes plots points from the fourth, fifth, and sixth film making these a trilogy as well as answering some lingering questions that have been hanging around for a while.

Add all of this together and Fast 6 is one BAD-ASS movie!

END_OF_DOCUMENT_TOKEN_TO_BE_REPLACED

Pain & Gain is a movie so crazy, so out there, so “Michael Bay” that it’s hard to even think that the events in front of you really took place. It’s even harder to rationalize that three body builders from Miami in 1994 staged a staggering heist that netted them wealth beyond their dreams. Pain & Gain is a look into the have’s and have-not’s and don’t let the comedy fool you as these were bad men that did bad things to get where they got. And by the end, when the credits show the actor’s images next to the images of the actual people they portrayed, you realize that this did happen and that real people got hurt and killed between October 1994 and June 1995.

Mark Wahlberg plays Daniel Lugo, a personal trainer at Sun Gym located in Miami, Florida. He has big dreams and wants more and feels that the universe owes it to him. He concocts a plan with co-worker Adrian Doorbal (Anthony Mackie) and fellow gym-nut Paul Doyle (Dwayne”The Rock” Johnson) to steal the wealth of businessman Victor Pepe Kershaw (Tony Shalhoub) whom also happens to be a client of his at the gym. Needless to say these three are not the best at executing a crime and it’s this comedy of errors that drive the plot of Pain & Gain.