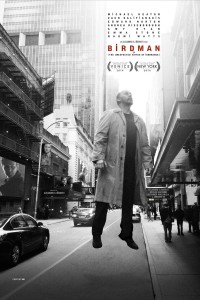 Twitview: A beautiful mess, with unanswered questions and characters in all the shades of grey. But Keaton is magnetic. B+

Michael Keaton was a heckuva great Batman.  And then he kind of dropped off the face of the blockbuster earth.  So of course the synopsis of Birdman — actor who played a famous superhero tries for relevancy in his senior years — got folks talking when Keaton signed on.  And though I have to admit that was a prime reason for me signing up for this screening, once the film started rolling, I was sucked into the life of Keaton’s Riggan Thompson, washed-up Hollywood trivia tidbit turned Broadway wannabe.  Most of that is thanks to Keaton’s amazing performance that ditches every scrap of dignity, but director Alejandro González Iñárritu (21 Grams) deserves praise as well.

Riggan Thompson is a washed-up former superhero superstar, but perhaps there’s more to that portrayal than anyone realized.  When he’s alone he levitates, moves things with his mind, and even soars through the air.  But is that real, or in his heartbroken, world-weary imagination?  I love that Birdman flipped my expectations not once, but several times throughout the story.  I thought I’d had the ending nailed down early on, but things sway and melt away under Iñárritu’s gentle guidance.  Something else that also changes throughout the film is New York City itself; it’s a glorious greasepaint wonderland, then it’s a gritty, ugly, bleak wasteland.  It’s a small shop filled with fairy lights, and then it’s a cold world where nobody wants to do anything but look at it through the lens of their Instagram account.  Cinematographer Emmanuel Lubezki (Oscar winner for last year’s Gravity) manages to show all the sides of The City That Never Sleeps, and they don’t all add up to a picture postcard.  It’s the most “real” cinematic interpretation I’ve ever seen of that city, and I’m betting Lubezki will get another nod come Academy time.

Edward Norton’s Broadway ac-TOR Mike Shiner is an amalgam of every overblown, narcissistic theater stereotype you can imagine.  But Norton managed to make me believe that he was a living, breathing person rather than an archetype.  Emma Stone as Riggan’s just-out-of-rehab daughter Sam deftly walks the line between fragility and NYC tough chick.  Naomi Watts and Andrea Risebourough (Oblivion) play the put-upon women that happen to fall for Mike and Riggan.  And The Office’s Amy Ryan plays Riggan’s ex, who basically shows up from time to time to make sure neither her daughter nor her ex implodes from their personal demons.  They’re all excellent.  Hey, I could rhapsodize on their performances longer, but all you need to know is they’re excellent.  Really.

The script is full of the kind of back-and-forth banter that I thought had been ditched by studio execs back in the 40s.   “Why don’t I have any self respect?”  ‘Honey, you’re an actress.’  Priceless.   It’s a raw, unflinching look at what happens backstage that’s sure to make theater nerds salivate (I know I loved the peek behind the curtain), and probably makes real performers nod in recognition.

Iñárritu surrounded himself with A-list actors, and let ‘em tear into the story.  The result is a film that may put off some folks — not everyone will be queueing up for a theater satire that skewers Hollywood and questions the price of fame — but for those who dive in, the water’s damn fine.  And where else are you gonna see Keaton and Norton wrestling in their underwear?