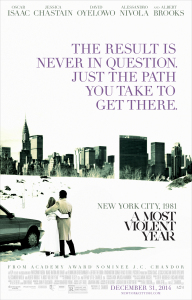 Dull. Tedious. Criminally mistitled. More like A Kinda Violent Year For NYC Oil Businesses.  A swing and a miss from an otherwise up-and-coming director.  F 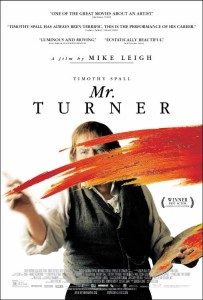 TwitView: a beautiful look at a beastly man.  Pope’s cinematography is glorious, and Spall’s lived-in performance is a wonder. A-

I enjoy art, but I don’t know much about it other than what I like to look at, and what I don’t.  The art of J.M.W. Turner is alive with color, shadows and emotion.  But Turner himself was a hard man to stomach, if the film Mr. Turner is to be believed. [And it seems as though he may have been much colder and brutish than this film allows.]  For folks like me who are new to the particulars of this artist, Wikipedia sums up his massive contribution to the art world nicely:

“Turner was considered a controversial figure in his day, but is now regarded as the artist who elevated landscape painting to an eminence rivalling history painting…. He is commonly known as ‘the painter of light’ and his work is regarded as a Romantic preface to Impressionism.”

Unfortunately, while his work is undeniably beautiful, the life he lived was anything but.  A libertine, he cared little for rules of the day, or “proper decorum”.  And director Mike Leigh shies away from none of it, giving us a look at a man who may have been a brute, but created beauty.

END_OF_DOCUMENT_TOKEN_TO_BE_REPLACED 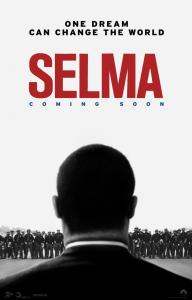 A tour de force of the man and the movement.  Director DuVernay + Oyelowo as MLK = must watch cinema. Grade: A 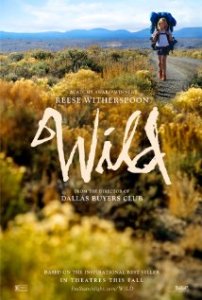 Twitview: fascinating look at one woman’s fall and redemption. Witherspoon is a wonder.  B+

Fluffy foxes.  Heroin.  Toenails.  Quickies on a dumpster.  Corn mush and Snapple.  Wild is a glorious, fascinating mess of a story, detailing a woman’s quest to right her glorious, fascinating, messy life.  Taken from Cheryl Strayed’s memoir Wild: From Lost to Found on the Pacific Crest Trail , Wild is a look at how completely a devastating life event can destroy you, and how picking yourself back up is a matter of sheer will and determination that can give you back yourself.  A good pair of Danner hikers thrown into the mix doesn’t hurt.

Cheryl Strayed’s life began a downward spiral after her mother’s sudden death from cancer at 45 (spinal in the film, lung IRL).  Strayed began “experimenting” with heroin and schtupping every guy she came across in an attempt to ease the pain of loss, which caused the death of her marriage.  After all that loss, she tries to pick herself back up by trying to become the woman her mother believed her to be…and she begins getting herself back on that track by hiking the Pacific Crest Trail.  As someone who’s never, ever hiked before.  Ever.  Spoiler alert: she succeeds.

Wild’s crazy blend of voice-over inner monologue, classic rock and timeline slight-of-hand works perfectly, and gets viewers into the heart of Strayed’s torment and her redemption.  Vallée uses the same seamless editing style that made Dallas Buyers Club so gripping, and Wild is just as captivating.  Though this is no 127 Hours, it’s Strayed’s story, and while there are others on-screen, they’re definitely the backing band here.  That said, performances by Laura Dern (as momma Bobbi), Newsroom’s Thomas Sadoski (as ex-hubby Paul) and Gaby Hoffmann (as BFF Aimee) stand out.  Witherspoon has already been tapped for a Golden Globe, and I’m sure an Oscar nod will be in her future.

But the real tip-of-the-hat goes to Nick Hornsby, who took Strayed’s memoir and turned it into a story that translates perfectly onscreen.  Shocked he wasn’t tapped for a Best Screenplay ‘Globe.  Because even with the tiny hiccups here and there, gotta say I was riveted for 99.9% of the film.  There were a few spots where the stream-of-consciousness caused a “wait — what” moment (was she pregnant at her low point?  What happened?) But otherwise Wild is less a story than it is a look inside the mind of a woman trying to pull herself out of the pit, and what happened in her life that put her there.  And though I’m too much of a wimp to hike the PCT, this film is a journey I’d take again.

“And I know it’s true that visions are seldom all they seem….”

Yeah, that’s from Sleeping Beauty (and the upcoming Maleficent).  But that line of lyrics suits this film perfectly too.  Because Labor Day’s outer crust of “man on the lam forcing a woman and her tween-age son to shelter him” hides a softer, sweeter filling.  If Labor Day was a pie, it’d be a perfect combination of sweet and savory, not too gooey; a pie tasty enough to have me thinking of seconds.

Why the pie metaphor?  Easy.  Because Labor Day also has the sexiest damn pie in the history of pie.  Yes I know you exist, American Pie.  But you get the silver here.  Labor Day is based on the novel by Joyce Maynard, and if you doubt the hotness of this pivotal scene?  Check out the way it plays out in Maynard’s novel.  Understand me now?  Yeah, thought you would. 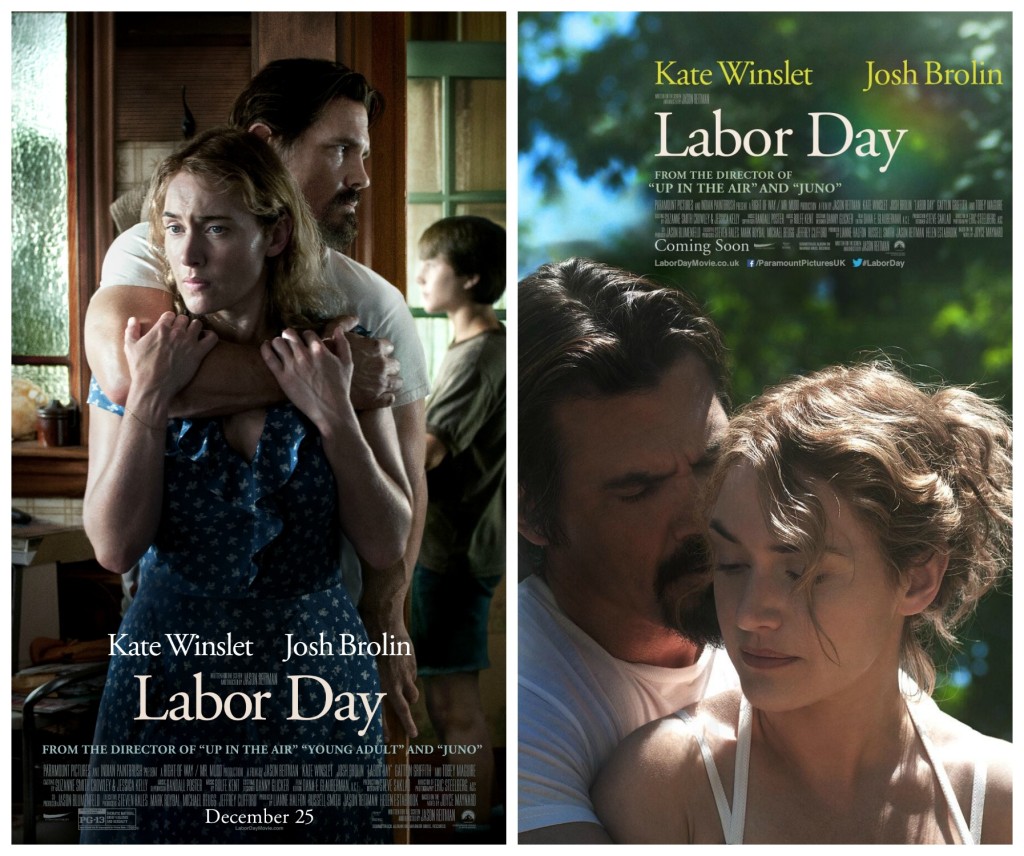 END_OF_DOCUMENT_TOKEN_TO_BE_REPLACED

Awards! Bet you didn’t know there were so many given out during Awards Season, did’cha? Well, I’m here to help.

Today’s the final day for submissions to the Location Managers Guild Awards. What are those, you ask?  Well, all movies need a place to film right?  I mean, you don’t want to see every single scene shot in a soundstage.  Location Managers are the people that scope out places to shoot scenes, make sure there’s adequate security (fire, police, and ambulance coverage too, if necessary), get the permits and basically do all the non-glamorous stuff so that directors, actors and the other artsy folks can do their jobs.  They’re also the folks locals interact with, so when Film & TV people shoot here in B’more?  Chances are you’ll run across a Location Manager doing his or her thang, and they’re the folks you’d talk to with any questions or concerns.

Anyway, their guild is doing an awards presentation March 20th.  Gotta admit these awards were a mystery to me, but now that I know the exist?  I’m dying to find out who will win, and why.

Read on for the full press release!

END_OF_DOCUMENT_TOKEN_TO_BE_REPLACED

Ejiofor is brilliant.  Nyong’o is a revelation. McQueen directs flawlessly. See it. SEE IT.

What is a ‘twitview?’ We at GeekForE! pioneered the idea for the short attention span world.  Movie Reviews in 140 characters or less.  Follow us on Twitter to get the latest movie reviews every Friday!  And read more about 12 Years A Slave after the jump!

END_OF_DOCUMENT_TOKEN_TO_BE_REPLACED

The Ravens win the Superbowl yesterday.  Today?  We get to see who won the 2012 Ghastly Awards, the awards that celebrate excellence in horror comics/graphic novels. (NOTE: I became a judge for the Ghastly Awards beginning 2012.  But I had nothing to do with tabulating the votes.  Nobody wants that.)

Take a peek at the winners — and congratulations to all!

The 2012 Ghastly Award Winners are:

Named for acclaimed comics creator “Ghastly” Graham Ingels, the Awards are in their 2nd year. Created to honor excellence in Horror Comics, every comic creator had a say in who the nominees were by nominating their favorites throughout the year.
We thank everyone who took the time to nominate and vote in the 2012 Awards. The submission process is now open for the 2013 Awards!

We congratulate all of the Winners and Nominees for what they bring to the comic reading community. To be nominated by your comic book creating peers is a big honor and the Ghastly Awards are here to celebrate your achievements.

For more information on the Ghastly Awards, or to submit your horror comics for the 2013 Award season please go to www.ghastlyawards.com.