Welcome back from a long holiday weekend (and for some, it was a bit longer due to work on Tuesday).  Again the little blue fish took the top spot while the next three spots were all new movies while the latest sequel in the box office finished up the top five. 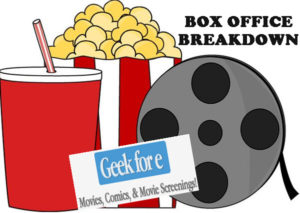 See you all next week!

Three new movies in the top five yet NONE OF THEM were able to take down the blue fish known as Dory.